On the occasion of his birthday: interview with R.U.S.Z managing director, lobbyist with soldering iron and >wild dog<-daredevil Sepp Eisenriegler

Dear Sepp, you were born in 1953. Would you like to share a few personal impressions from your childhood in post-war Vienna and from your first rebellion?

I was an "economic miracle child" and thus never had to suffer from hunger. As a toddler, I already got the fresh vegetables from our allotment garden. Later, like many in his social bubble, my post-war father, an ÖBB train driver, acquired a freezer and every six months fetched half a freshly slaughtered pig from a farmer friend. In the absence of a car of his own, which many of his work colleagues already had (but they were in principle below that in their free time), he always traveled by train with 2 suitcases and a backpack. The kitchen and bathroom of our cramped ÖBB cooperative apartment became the scene for the "Sautanz": My mother stood with a red head at the stove to omit lard, my father mixed the blood, brought in milk reusable bottles with the "waste", which the friendly work colleague, a trained butcher, provided when cutting the large pieces of meat, in the bathtub to a Blunzen-Brat, which he filled afterwards with a large funnel into the cleaned intestines.

Also because of this behavior of my father, which I did not understand, there were conflicts when I reached puberty. I rebelled against wearing the old clothes of my older brothers and accused my parents of petit-bourgeois, conformist behavior. 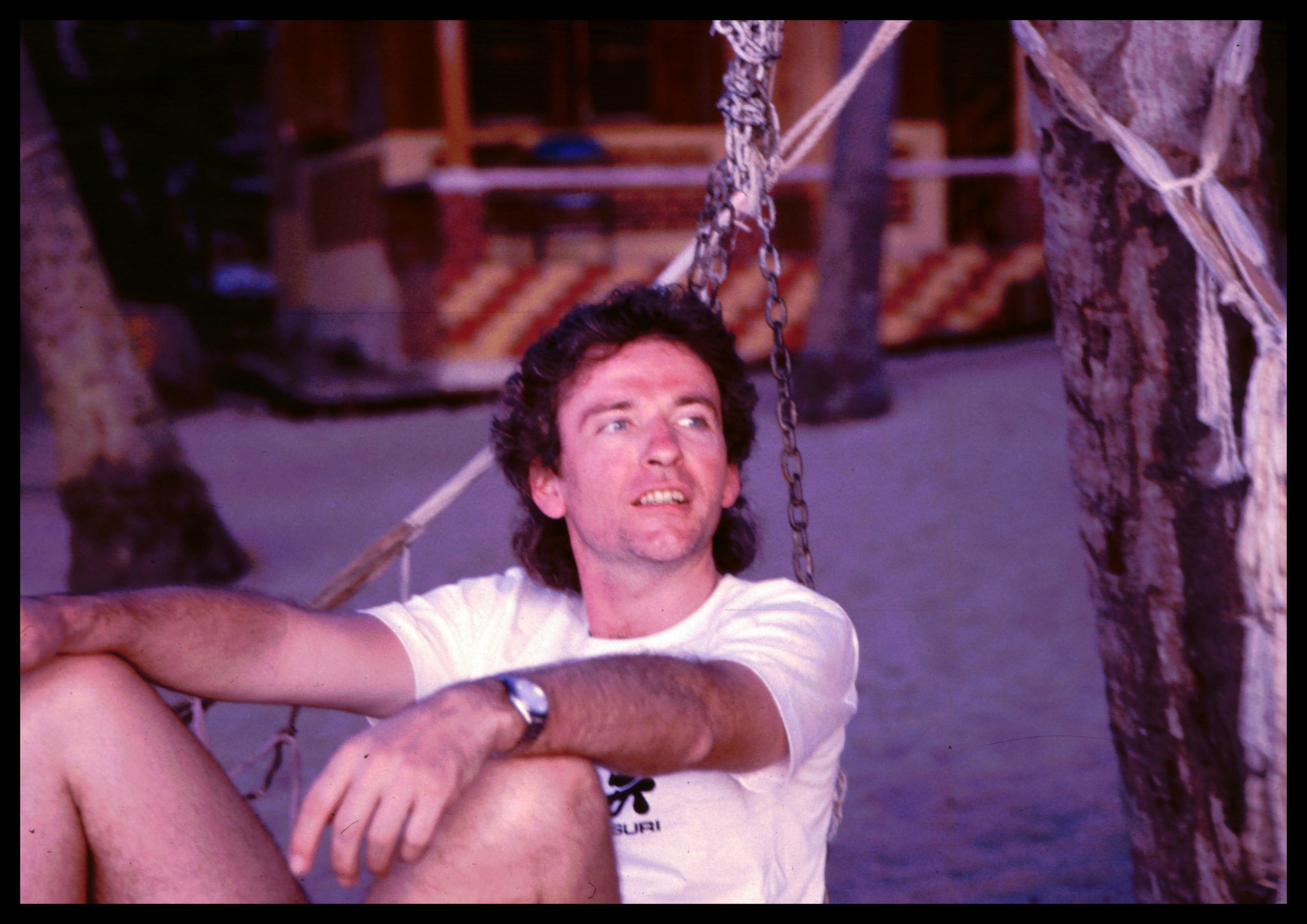 Sepp Eisenriegler at the tender age of 22 on Crete

How did you experience the wild 1970s in Austria as a young adult? We heard you were already a "wilder Hund" (verb. "wild dog" -> daredevil) back then?

Already in the lower school of BRG 20 I planned to form a band with some classmates and play Beatles hits. When I was 13, I joined a mixed class for the first time. That was the end of my attention to class. My grades plummeted toward barely sufficient (D) and resulted in family conferences. Again, my two older brothers were held up to me as role models. It was good to look beyond my family and school and find the hippie movement with sex, drugs and rock 'n' roll. A change of school to a musical-pedagogical ORG brought relief. The former teacher training college gave me a breather due to lower requirements, Latin started anew. Classical guitar lessons were not a matter of the heart, but created the basis for my repertoire of Dylan, Cat Stevens and Donovan songs. The dawning era of Austro-pop didn't leave me unimpressed either: Jack Grunsky, the Milestones, the Butterflies with the later Ostbahn Kurti. And then came da Hofa by Wolferl Ambros! As Ambros interpreter I could celebrate some successes. In general, when I later sang "Schifoan" as a ski instructor in Mühlbach am Hochkönig. Speaking of which: I worked on my "Wilder Hund" image for a long time: The first descent of a steep face from the Hochkönig summit (Birgkar-Rinne) with the mono ski contributed extremely to this. Breite, Krumme and Lahning-Ries from Schneeberg were quite boring in comparison.

Speaking of the 1970s: I owe my thorough, long-standing [sic!] academic education to Bruno Kreisky. 15 years of study would not have been possible otherwise, despite many side jobs (ski instructor, beer guide, cab driver, waiter, pedagogical assistant).

That is correct in principle. For example, the RAF was always suspicious to me. The rebellion against the establishment cannot succeed with excesses of violence! The shitty action of Otto Mühl & Co. at the University of Vienna was already too much for me. I praise the occupation of the Hainburger Au. - There, too, things got rough in parts. Not only because of the cold, especially at night in the tent. This sense of community, this solidarity in the fight for a common good cause: that was something. And when the human ecologist Peter Weish, to whom I am still on friendly terms today, came by, in addition to his lectures, and calmed down the agitated people and gave us all organizational tips, one of our forefathers became a role model.

"Pitsidia in Crete in the hinterland of the then hippie commune of Matala, where we lived in caves."

How did this background influence your later commitment from geography teacher to environmental consultant and pioneer in the field of repair and circular economy? And if you think back to your visions in 1984 regarding sustainability and environmental protection (i.e. 14 years before the founding of the R.U.S.Z.): Which visions have already been realized today in 2021 and what is still on the agenda?

Without this background, I would not have persevered through the many years of economic hobbyism that were necessary to enforce my mission of resource conservation in regulatory terms. It was a long hard slog and from time to time a vale of tears. Today, there is an EU Green Deal, a circular economy package with action plans, and the right to repair. The reduction of VAT for all repairs just needs a little push to be enforced. Several countries already offer repair subsidies to compensate for existing market failures. NextGenerationEU creates effective incentives to rebuild the Corona-induced depressed economy as a circular economy. CO2 taxes, later a socially balanced ecological tax reform leading to true prices for new products, have never been so close at hand! So it paid to persevere until repair became a profitable business model. Now we have developed and tested a social franchising system: Europe urgently needs a serious repair infrastructure. What would we have done through standardization and development of independent testing methods, if there is then no conveniently accessible repair service providers..

And I won't give up until we can buy only durable, repair-friendly, re-useable products in the EU economic area. For electrical and electronic equipment, this incredible goal will be reached as early as 2025!

Dear Sepp, thank you for the interview. You said before you request a song for your birthday?

Yes, I dedicate the song "Leichtes Gepäck" by Silbermond to all my friends and comrades-in-arms. All you need is less!

Here you can find the birthday song

R.U.S.Z und RepaNet begrüßen die ambitionierte Strategie für Kreislaufwirtschaft (KLW) der Bundesregierung. Re-Use und Reparatur...
Read More
The R.U.S.Z. is becoming an international beacon project in the field of repair/reuse and its know-how is internationally...
Read More
Summer interview with Managing Director Sepp Eisenriegler about the repair bonus, our R.U.S.Z projects and the contribution of repair...
Read More
A right to repair requires durable and repairable products, useful information for consumers and affordable...
Read More
The nationwide repair bonus starts on April 26, 2022 at www.reparaturbonus.at ! Funding is provided for 50 percent of the...
Read More
The first run of the ReSeTech education program has been successfully completed. We are working on a continuation and...
Read More
With the car pharmacy exchange action our joint civil society aid action for Ukraine comes to an end...
Read More
Already, 3.6 billion people worldwide are at high risk. The window of opportunity for effective action...
Read More
A draft for the Austrian circular economy strategy is available. The R.U.S.Z is involved as a stakeholder in the development process of...
Read More
Since the end of September, BFI and R.U.S.Z have been jointly training repair specialists. The pilot project is intended to set the course...
Read More

English
English Deutsch (Österreich)
Climate referendum in the parliamentary environment committeeClimate popular initiative in the environment committee II
Zum Ändern Ihrer Datenschutzeinstellung, z.B. Erteilung oder Widerruf von Einwilligungen, klicken Sie hier: Einstellungen